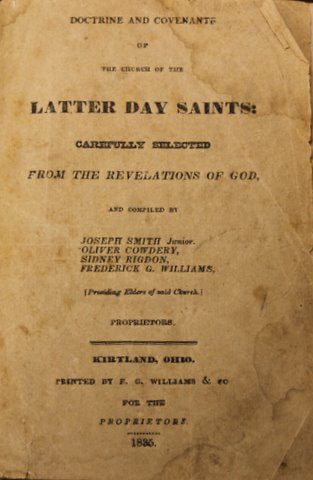 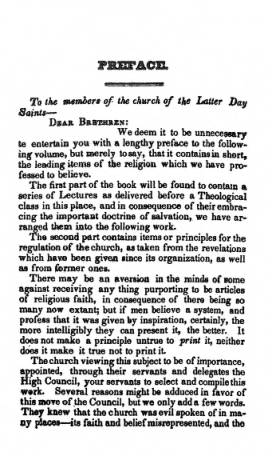 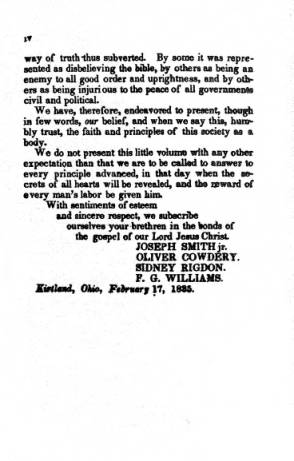 Story Behind the 1835 edition of the Doctrine and Covenants:
Latter Day Saints, along with the Methodists, Universalists, and Millerites, were all communication entrepreneurs throughout the mid-19th century. Each group used the press to spread their message through scriptures, hymnals, newspapers, and broadsides. The print shop played a role in 19th century culture similar to the internet today. It was an important source of information. A printing press gave people an opportunity to share their ideas and opinions on politics, news, theology, and local happenings.

In Kirtland, Ohio, a thirty-by-thirty-eight-foot structure was built in 1834. This small two-story frame structure was located directly behind the Kirtland Temple. The main floor served as a school, while the second floor housed a printing press. Rooms on both levels, as well as the loft, were used by church leaders as offices.

It was in this small frame building that selected "Lectures of Faith" were delivered by Sidney Rigdon to the School of the Elders and here that the missionary-oriented Council of the Twelve Apostles were first organized. Decisions made at meetings held in this building and religious ideas reproduced in print have since impacted the lives of many around the world.

It was in this small frame building in Kirtland where the early Latter Day Saints printed the first Doctrine and Covenants in 1835. The Doctrine and Covenants was the church's second attempt to standardize church beliefs. The book of scripture was compiled by Joseph Smith, Jr., Oliver Cowdery, Sidney Rigdon, Frederick G. Williams and printed by F. G. Williams & Co., Kirtland, Ohio. The book is divided into two parts: the first section was a collection of seven lectures (the doctrine), while the second section included more than 100 revelations (the covenants and commandments). In addition to the 1835 Doctrine and Covenants, the Kirtland print shop is where early church members printed their first hymnal (1835), several newspapers, and the second edition of the Book of Mormon (1837).