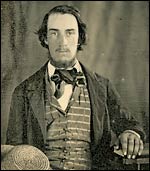 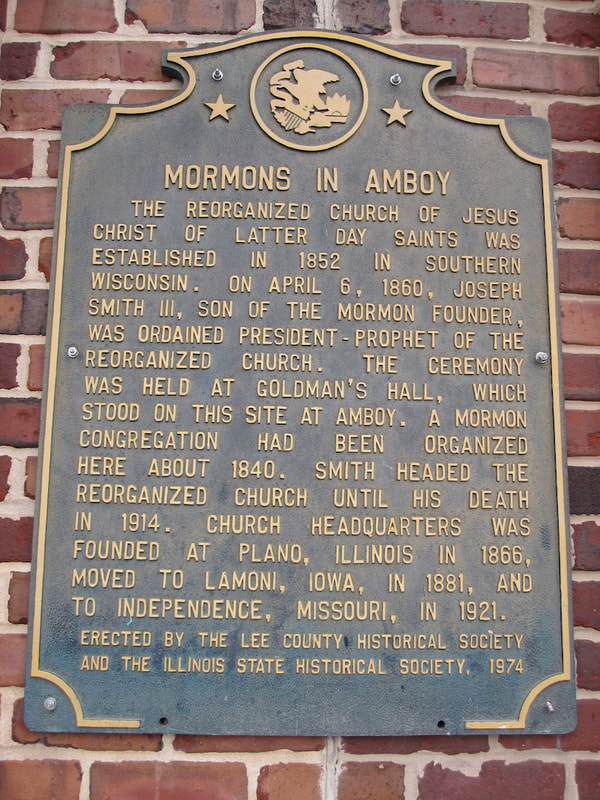 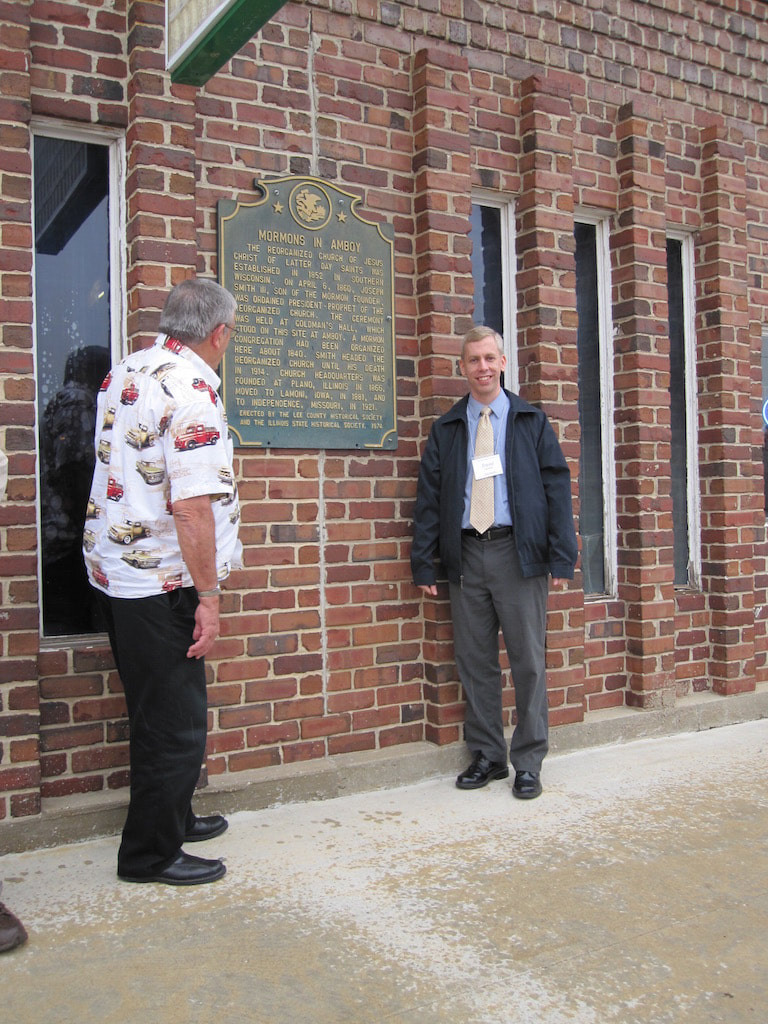 Historians appreciating the marker
Story Behind the Historic Marker:
The historic marker that appears above commemorates the ordination of Joseph Smith III on April 6, 1860. Jospeh Smith III's ordination took place at a Mechanic's Hall in Amboy, Illinois. Joseph Smith III and his mother, Emma, arrived in Plano by train the day before. Shortly after their arrival, they joined church members at a small prayer service held at Royal and Experience Stone's home. The two quietly snuck in to the back of the service wishing to not interrupt the prayers and testimonies being shared by those in attendance. Listening from the back of the room, Joseph was deeply touched by the testimonies shared by his fellow church members. Their stories and sentiment confirmed to Joseph that the same Spirit that led him to Amboy was also leading and nurturing this small group of devoted believers gathered in Amboy.

The next morning, on April 6, 1860, the conference convened at the Mechanics' Hall located in the center of Amboy. The 300 or more gathered that day would have heard sermons from Zenas Gurley, Samuel Powers, and E. C. Briggs. In the afternoon, Joseph Smith III shared a message with the attendees. His message included the words:

I would say to you, brethren, (as I hope you may be, and in faith I trust you are), as a people that God has promised his blessings upon, I come not here of myself, but by the influence of the Spirit. For some time past I have received manifestations pointing to the position which I am about to assume. I wish to say that I have come here not to be dictated by any men or set of men. I have come in obedience to a power not my own, and shall be dictated by the power that sent me...
I will come to you if you will receive me, give my ability, and the influence my name may bring, together with what little power I possess, and I trust by your prayers and faith to be sustained. I pledge myself to promulgate no doctrine that shall not be approved by you, or the code of good morals... I do not care to say any more at present, but will simply add that if the same Spirit which prompts my coming, prompts also my reception, I am with you.

Following the address, Isaac Sheen presented Joseph Smith III and Emma Smith to the conference delegates and proposed that they be accepting into the organization on their original baptism. The conference delegates agreed. Sheen then moved that the conference accept Joseph Smith III as prophet and president of the church. The vote was unanimously approved. The ordination took place on the rostrum. Those who participated in the ordination included Zenas Gurley, president of the Council of Twelve Apostles, William Marks, former Nauvoo Stake president, and Council of Twelve members Samuel Powers and William W. Blair.

One of the first acts requested of Joseph Smith III as a newly ordained president was to remove a list of church members from church membership rolls due to their actions that were in violation of church membership. The congregation gathered in Amboy quietly waited for Joseph's judgment as he looked through the list of names handed to him. In a move that may have surprised those in attendance, Joseph chose to love and forgive the people on the list, rather than remove their membership. It was one of many acts of charity modeled by President Smith over the 54 years he served as Prophet/President of the church.

Today, all that is left from that historic ordination is a commemorative marker mounted to the outside of a brick building.