Historic Image of Israel A. Smith in a Baseball Uniform 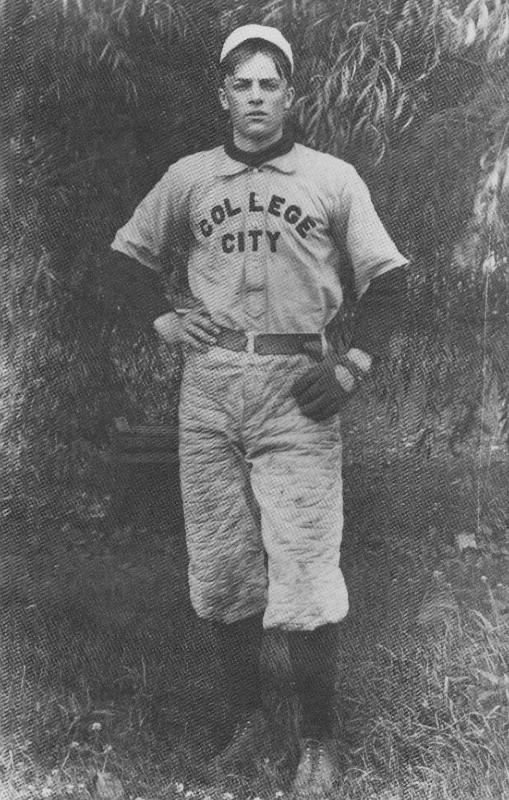 Story Behind the Historic Image:
Israel A. Smith, Community of Christ president from 1946-1958, was an avid baseball player and fan. As a child growing up in Lamoni, he would have practiced his baseball skills with his older brothers in a field located near their home, Liberty Hall (as shown in image above).  While playing for the College City baseball team, Israel was known for being a "heavy hitter." He was also fairly good in his fielding skills as pitcher and first baseman. His father, Joseph Smith III wrote to Lucy, Israel's sister, following a difficult loss to the Davis City team, "you could tell by the score that Israel had again played an almost faultless game at first base."

While serving as church president, Israel was known to take friends and new appointees to Kansas City Athletics games. Charles Neff, Community of Christ apostle, recalled that attending a game with President Smith was considered a special treat and one did not refuse. However, the experience often meant arriving to the baseball park early and hearing Smith share all the details of the game such as player statistics, skills, etc. Neff recalled that it also meant leaving the game early, sometimes during the most exciting moments of the game in order to avoid traffic.

Garland Tickemyer, a church appointee assigned to southern California, remembered a time when President Smith was being interviewed by the Los Angeles Times during the 1950s. Smith struggled to answer questions about world events and the work of the church. However, he bounced back quickly when the interviewer inquired about baseball. Tickemyer said that Israel "quickly responded and elaborately expanded on his thoughts of the current baseball season and predictions for the World Series." One of his more treasured possessions was an autographed ball signed by "The Big Train" Walter Johnson, pitcher for the Washington Senators and among the first five inductees to the Baseball Hall of Famer at Cooperstown, New York in 1936.