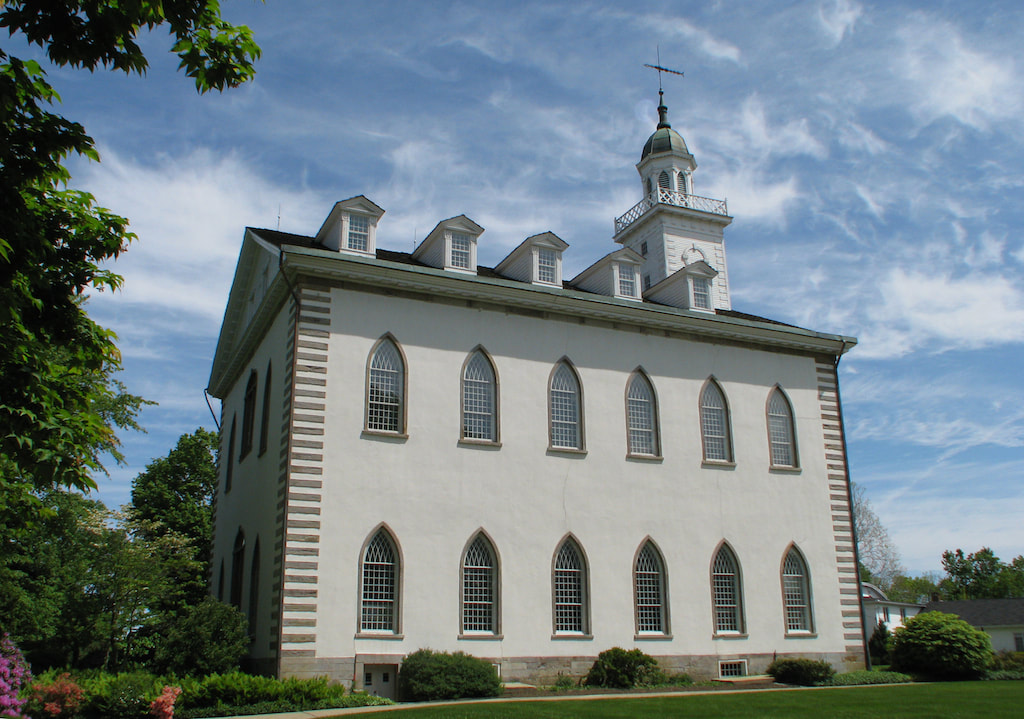 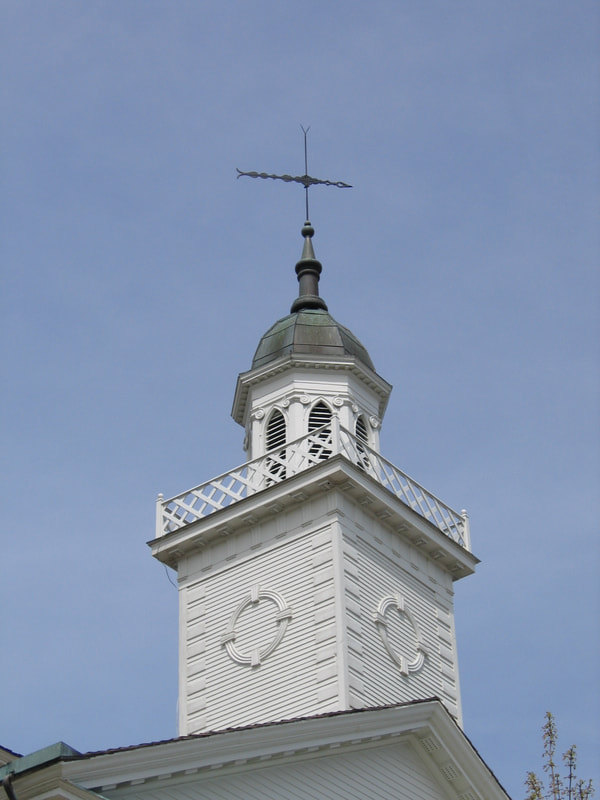 Story Behind the Finial:
After soaring high above the northeastern Ohio hills for over 150 years, the original Kirtland Temple finial now rests inside the Kirtland Temple Visitor Center.  The large artifact stands alongside two of the original Gothic windows in the open gallery space where visitors from all over the world have the opportunity to observe first-hand the massive size of this historic object (see image above).

In addition to being a wonderful conversation starter amongst Kirtland visitors, the original finial holds a unique story of its own. The archictectural piece once adorned the top of the temple cupola. It was replaced with a reproduction in 1993. weather beaten and battered, the finial displays signs of the extreme Ohio temperatures and battles with mother nature. The finial also helps tell the story of a woman named Catherine "Cassie" Kelley and her struggle to preserve Kirtland's "House of the Lord."

In April 1882, Catherine "Cassie" Kelley moved with her growing family to Kirtland, Ohio. Cassie's husband, E. L. Kelley, was appointed counselor to the Community of Christ Bishop, George Blakeslee. One of E. L.'s new responsibilities included supervising the massive preservation efforts on the Kirtland Temple during the 1880s. Throughout the decade, E. L. Kelley and his brother, Apostle William Kelley, travelled through the northeastern and midwestern states raising funds for the preservation of the temple. While away, supervising the maintenance workers, giving tours, and facilitating activies at the Kirtland Temple often rested on Cassie Kelley's shoulders.

Cassie was an avid writer and many of her letters to E. L. and William during this time were saved by their descendants and later donated to the Community of Christ Library-Archives. Her letters reveal details about various temple visitors, congregational life in Kirtland, colorful community events in or near the temple, and the treasurered details related to raising a young family.

One particular letter described an exciting event that took place shortly after Cassie's family arrived in Kirtland. One evening while her husband was away on travel, Cassie discovered flames rising from the Kirtland Temple roof and bell tower. According to Cassie, the fire started as the result of a tinner's kit used by a man working on tinning the finial and belfry earlier in the day. Cassie immediately alerted her neighbors and formed a bucket brigade to extinguish the fire. The fire was later reported in the Saints' Herald with Cassie and friend, C. Scott, as the two leaders in extinguishing the fire. The Saints' Herald reported:

"By letter from Kirtland to Coldwater, Michigan, we learn that the roof of the Temple at Kirtland caught fire from the tinner's kit, employed in the tinning of the belfry; and but for the timely discovery, and the energy and assistance of Bro. C. Scott and Sr E. L. Kelley, the old building would have been burned."

Cassie wrote to her husband that the Temple suffered little fire damage thanks to the quick work of the Kirtland bucket brigade. Today, the temple finial reminds us of the tireless efforts made by people like Cassie Kelley to ensure the long term preservation of Kirtland's "House of the Lord."

For nearly ten years, Cassie assisted in the management and preservation of the Kirtland Temple properties, as well as filled a void in community ministry while her husband was away. Eventually, E. L. Kelley's employment transferred the family to Lamoni, Iowa, and later to Independence, Missouri, in 1905.