Image of Phebe and Andrew Tabbut 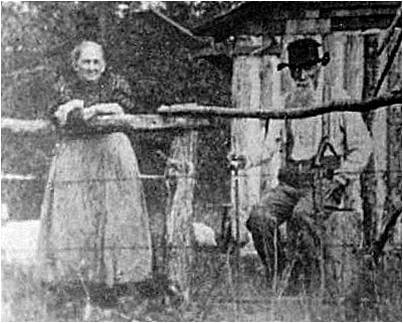 View of the Tabbut farm in Scrambler Township, Otter Tail County, Minnesota
Story Behind the Photograph:
The Andrew and Phebe Tabbut family moved to Minnesota from Maine sometime after 1881. They settled in Scrambler Township, just west of Pelican Lake in Otter Tail County. Early missionary work and services were held at their home. Their main branch was the Union branch located at Clitherall (Minnesota). Small groups met in homes and schools located at Silver Lake, Luce, Maine, and Girard townships.

Andrew was a sailor and held the office of elder in the Church of the Messiah. In 1866, his famiily joined George J. Adams on a mission to Jaffa, Palestine to organize the American Colony. The venture proved to be a failure as the hoped for return of Christ did not come and the colony was unable to raise enough food and interest to continue. In 1867, Samuel Clemens (a.k.a. Mark Twain) traveling on board the "Quaker City," met and helped take on members of the colony who wanted to return to the United States. Twain mentioned this meeting with members of the colony in his book, Innocents Abroad.

While residing in Maine, Andrew and Phebe were baptized in 1872 by John C. Foss, a missionary for the Reorganized Church of Jesus Christ of Latter Day Saints. They moved to a farm in northern Minnesota in 1881. On April 16, 1881, Andrew and Phebe lost a daughter, Generva, at the age of 21. The funeral service was performed at Detroit Lakes, Minnesota, by Marcus Shaw.

By 1885, the family was living near Cormorant Mills area where John C. Foss reported on September 2nd that the members had a great misunderstanding about the tithing issue. A current "wives tale" comes from this period where a sister announced at a reunion that she knew the church was true because she did not need to pay any tithing. Foss resided at the Tabbut home until he left for the northern Illinois district where he labored until winter.

"George Crane took us with his team to Lake View to Bro. Tabbut's, dining on the way at Sister Albertson's who with her husband treated us kindly. On the (zd) held meeting at Bro. Tabbut's but roads so bad that only Sister Keith and husband were present besides Bro. Tabbut's family. These Saints are strong in the faith and full of good works and words. The next day Bro. Tabbut took Bro. Alexander (Hale Smith) to Cormorant to Bro. McLeod's and I went home. Bro. Alexander commenced work at Cormorant on January 29th, preaching every night. Two were baptized, Bro. and Sr. Ellsworth. Had some opposition but we don't scare. Bro. and Sr. Way came twelve miles, Bro. McLeod sent out the word far and near and none entered more fully into the joy or the harvest than did he and Sister McLeod. May God keep them faithful to the end, and for their kindness to us reward them in this life also. There are a number of active Saints here, but it would make this letter too long to mention all by name."